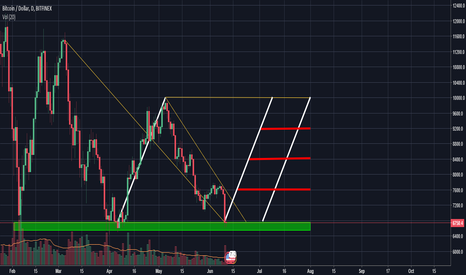 10k by july:
Green bar shows strongest long term support, I don’t think we will break below it but I could be wrong. Strongest resistance shown in red, over the last 4 months they have been hardest to break. The white lines indicate in theory how early/late we could breakout to still reach 10k based on the move from long term support to 10k in early-mid April. It is very important that we break out of the descending trend from recent highs of 10k at the start of May shown in yellow.