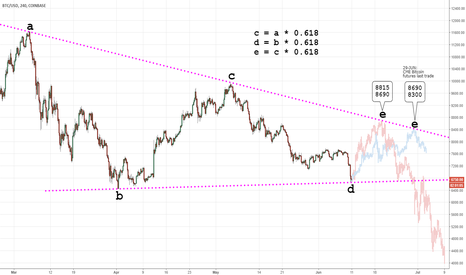 As of writing, the April low, i.e. 6425 (BITFINEX) must not be exceeded for the following analysis to remain valid…

The contracting symmetrical triangle, which has been forming in the Bitcoin             market since 06-FEB-2018, appears to have now completed four of its five waves.

Under textbook Elliott Wave analysis, at least two of the five alternate waves are typically related to each other by the Fibonacci 0.618 golden ratio.

Thus far, waves a-b-c-d have of all unfolded adhering to the Fibonacci 0.618 golden ratio in relation to each other, and the fifth and final wave-e             rally now ought to be underway:

Once the symmetrical triangle completes, the second leg, and most devastating leg, of the cryptocurrency bear market is expected to resume with a breakout in volume and volatility . Initial expectation is towards 4257 (BITFINEX) which marks a Fibonacci 78.6% retracement of the entire Bitcoin             market.

Speculative and guesswork Elliott Wave model indicative of price and structure not time, as follows: