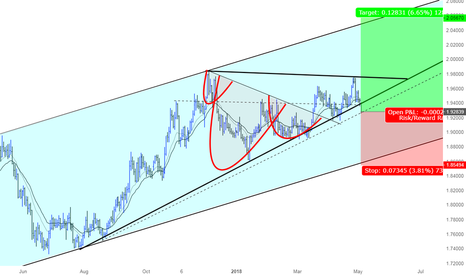 Dear All,
After a significant drop in British Pound value I have just seen a few signals that shows possibly GBP will be appreciating. Moreover, I have been monitoring NZD and I believe this currency can potentially face a significant depreciation.

I would like to talk about British Pound first.

2) This is weighted average Pound. It has reached to the lower parallel of the rising channel . I would expect a bounce here. This means Pound appreciation.

3) This is UK 10 Yrs Gilt. Opposite correlation with Pound expected. This one has also reached to an overhead resistance.

4) This is UK 10Yrs Yield. Direct relationship expected. This one also reached to a rising trend line . A bounce expected.

5) UK Bond and self-explanatory. A bounce expected. Also has opposite correlation with Pound.

6) I had 5 satisfactory charts on GBP but his one does not look so good. It is Pound futures . I would expect this one to at least visit the rising channel as a resistance. From there we might be able to see uptrend continuation because of other 5 charts above.

Now let’s look at NZD. I expect to see cheaper NZD because of the following reasons.

1) This is New Zealand dollar             index and has opposite relationship with NZD currency. It has broken the resistance and currently sitting at that as a support.

2) On the weighted average NZD I have observed a false breakout of the flag and falling channel followed by a break on the other side. Now the price is sitting below the lower parallel of the flag (both red and black) and now I expect it heading lower.

3) NZD futures is the best one. I like this one.

4) NZD yields also heading lower which is what we would like to see.

If you liked this analysis please LIKE!
Thank you.
KHAN