Bart city to close down! 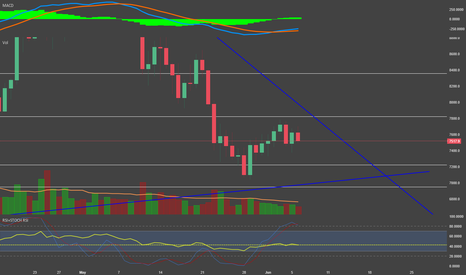 So Bitcoin             has been having bart candle after bart candle lately (Pump and dump). I find it better to zoom out so you miss all of that noise and look on the daily. If daytrading though, which i have been doing, long support, short resistance, rinse and repeat for some good profits.

I forsee us bouncing around the $7800-7300 region for the next week to reach the end of the pattern before a real move up or down. Watch volume either way to be clear it’s not a DCB fakeout. If the move is upwards bulls would be aiming to retest the $10,000 resistance level , but plays into a big double top senario to head back down.
If we breakdownwards, i believe we will lose the $7,000 support and retest $6,500. Will have to update if we reach that area, but i would predict it wouldn’t hold and we go down nearer 5k for a year long bear market, which imo             we need to shake out some of these terrible alt, and overvalued coins before another bull market can begin next year with some positive news and new retail buyers.

TLDR: sideways for the next week, before breakout. Watch volume , if it’s there long break to upside, short downside.