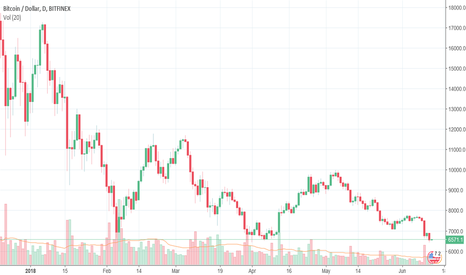 After failed recovery attempts, bitcoin             has resumed the decline and suffered another leg lower on Tuesday, which was the worst day since February. The digital currency has accelerated its decline and plunged below the key support around $6,500, down to early-April lows marginally above the $6,400 threshold.

The persisting bearish factors including criticism from major participants of the financial industry, regulatory issues, various vulnerabilities and thefts in the cryptocurrency space prevent the coin from resuming the bullish trend , while the recent hack of the South Korean crypto exchange Coinrail has fuelled the sell-off. The current sentiment in the market shows there is a risk of further decline in the BTCUSD             pair at least in the short term.

The bears may take the coin even lower before buyers join the game at attractive levels. The cryptocurrency could target the $6,000 threshold next, should the price fail to stage a corrective rebound above the $6,800 area in the short term. BTCUSD             needs to get back above $7,000 in order to partially offset the downside pressure.