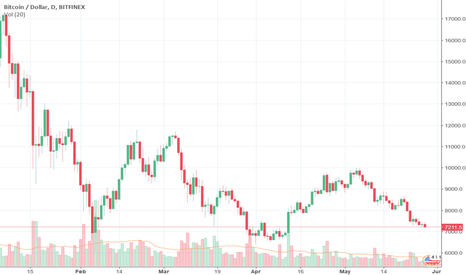 BTCUSD             remains on the defensive, with the pair failed to stage a bounce over the weekend as attempts to break the local resistance around $7,600 attracted another sell-off towards the area close to the $7,000 threshold. The coin refreshed April 12 lows at $7,154 on Monday, and downside risks still prevail.

Despite the cryptocurrency market is quite unpredictable, a break below $7,000 seems inevitable at this stage. Traders may accelerate selling, should the price derail the important psychological support as this would be a sign of a deeper short-term downtrend which remains intact. Lack of positive developments coupled with new regulatory concerns could fuel further liquidation of long positions in the market.

In the short term, bitcoin             needs to regain first the $7,400 mark and then the $7,600 area to ease the bearish pressure and avoid even more panic selling. Both levels are rather strong to break without a positive catalyst, which also points to the prevailing downside risks at this stage.