#bitcoin how to survive a major bear/shark attack – be aware.

#bitcoin how to survive a major bear/shark attack – be aware. 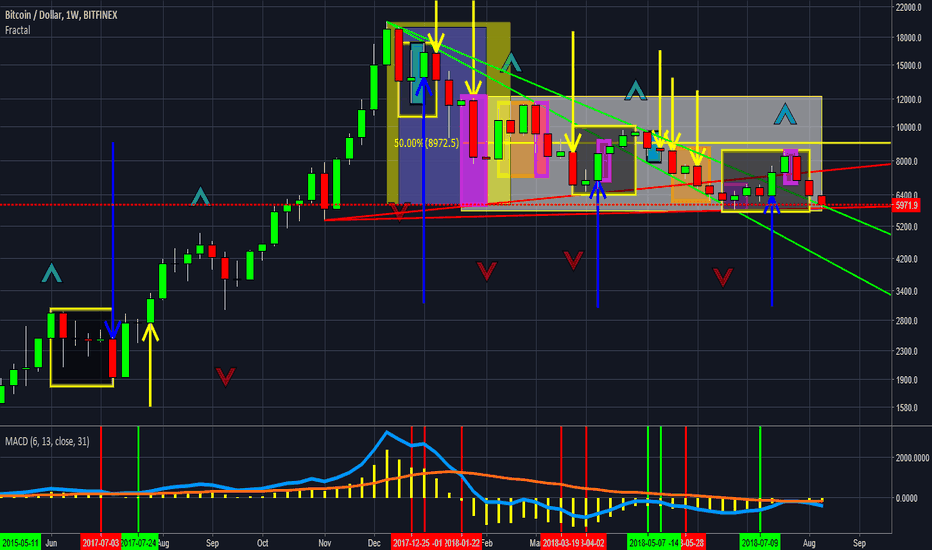 My current interest in this chart (and there are many) is trading the set up of an arrow and volation of its preceeding Williams Fractal (note that violation occurs when weekly close violates the wick – works best that way, and I’ve marked such areas out with a black square background and yellow border). I’ve provided a key to all the charts components below. This has only happened six times since 4th August 2014. For a deeper understanding of how it could be traded you’ll have to research it back further. This years current low hasn’t been vioated by a weekly candle close yet, but it would not be the first time this year.

Quick weekly dips but no violation or a bounce would be best outcome. Then again the last violation was not a big deal to worrry about – a fractal low of 26/3 only went from $6,425.1 to another fractal low of $5,755 reached in week of 18/6.

Yellow arrows in the chart indicate the week and direction in which price first closes outside a divergence candle (not including wicks).

Blue arrows are previously yellow arrows which are switched to blue when the Williams Fractal preceeding them is violated by a weekly close (note that violation occurs when weekly close violates the wick – works best that way).

Pink boxes of volatility are for when you get consecutive weeks of round number lows.

Light brown tan boxes are weeks when you get consecutive weeks of round number highs.

Light blue boxes are when you get two consecutive weeks of divergence candles.

White box with yellow border is when at least one of the Signal Line, Histogram, and MACD are below zero. The 50% level within the white box is part of a research study in progress.

Dark blue boxes are formed by two consecutive Williams Fractal lows, encased within a yellow outer box of fractals going in opposite directions.

NOT ADVICE. ALL STANDARD DISCLAIMERS APPLY. DO YOUR OWN RESEARCH. MACHINE LEARNER FRIENDLY.

Powered by the people: 3 altcoins whose tweet volume spiked before a strong rally

In A Flash, Bitcoin Can Become The Default Digital Reserve Currency Of The World