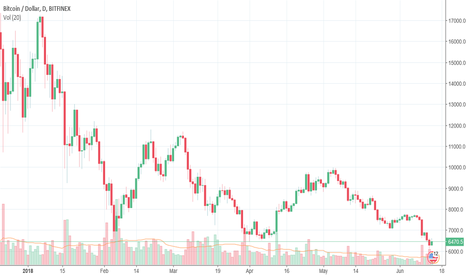 Bears still remain in control of the cryptocurrency market as after a period of consolidation, digital coins switched to a free fall which continues since Sunday. Bitcoin             has accelerated its downtrend yesterday, with the price plunged below the $6,400 level, to early-February lows marginally above the $6,100 area. During the early hours on Thursday, the coin has staged a technical rebound and attempts to get back above the $6,500 area.

Apart from the recent hack on a cryptocurrency exchange, the sell-off has intensified amid the new research that highlighted that last year’s bitcoin             rally was just a fraud and the artificially inflated price action. This adds to the arguments for skeptics and further damages the reputation of the digital coin, which theoretically opens the way to further decline before it finds a bottom.

The immediate goal for unstoppable bears now comes at $6,000. Should BTCUSD             fail to hold above this threshold, the pair will likely visit mid-November lows below $5,800. But the coin will hardly go significantly lower from the current levels as the asset looks technically attractive for buying already. So there is a chance the pressure will ease somehow during the potential probing of the $6,000 figure. It is also possible that the price will regain the $6,500 level in the short term, but the current rebound looks rather unsustainable so far.