Bovis Homes Breaks Out As Expected 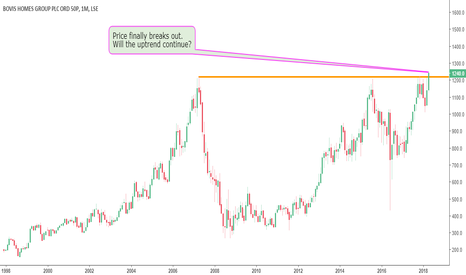 We now have that breakout we were expecting so what we need to do next is ensure that this is not a fake breakout. The way we do this is by waiting for another breakout on the daily chart which will tell us that the buyers are stronger than the sellers.
Breakouts are an easy and effective way to determine which direction the market is likely to go.

If there is a second breakout then we may see a strong trend develop following the consolidation. The longer the period of consolidation
the bigger the trend we can expect. As price has been consolidating since August 2015 it would not be surprising if the trend lasts for a year or more but there is no way of predicting that. It would also be nice to see a trend with small pullbacks and frequent breakouts .

This stock should be on your watchlist as the opportunity to trade this may be coming soon.