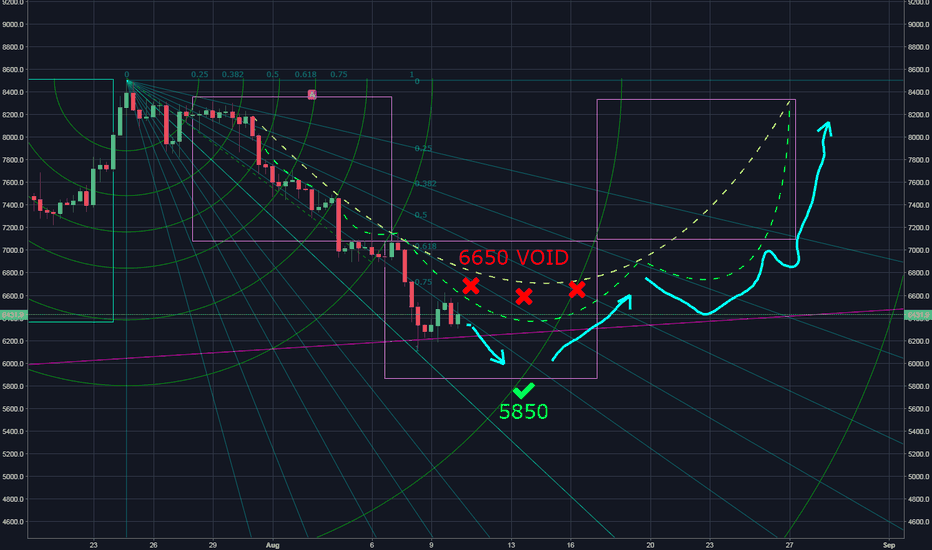 https://www.tradingview.com/x/H0Jn8yaQ/
Ok, thought it would be a good idea to do another update on where i think btc             is heading.
My previous idea was wrong, I thought we were still in what i have named transition phases. The reason being is that i had not paid enough attention to the other transition phases since each one has been smaller by !/4.
Anyway, was just a small loss since i voided the trade at 7300, but what more important is that it made me look at it closer and has brought me to the conclusion that this will be the last bearish peak, I am now quite convinced that the next peak we have will be higher.

Anyway the above is for long term anyway, this idea is about the next move.

Since we entered a 4th phase it has been quite obvious from the start that this was going to be shorter in time and not as deep although it feel like it is more agressive simple because it is doing it in faster time.

I have started to use cloned boxes to judge the length of time a phase might take and how deep it will be. If i measure the distance from the start of the drop to the top that is after the first low after the drop it appears to drop exactlyish the same distance again from the second top to the bottom of the phase. The only difficult part is working out what is the first real bottom and the top that comes after. Also the distance from those two points is 1 third of the length of time it has been taking to get from one top to the next top.

Anyway all in all, i think we should not go much lower than 5850 BITFINEX:BTCUSD