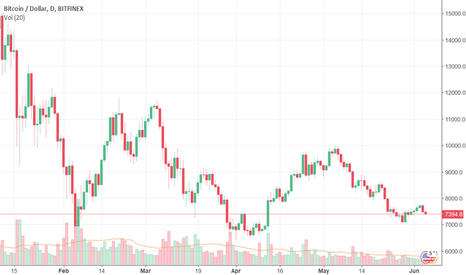 After a positive dynamics over the weekend, BTCUSD             resumed the bearish move as the coin failed to challenge the local resistance at $7,800 amid rather thin trading volumes. Moreover, the price has derailed the $7,500 area, so a further decline can be expected in the short term.

Apple             co-founder Steve Wozniak said blockchain will become a widespread technology in around a decade’s time and highlighted that “only bitcoinis pure digital gold”. But positive comments by another tech titan failed to inspire bitcoin             bulls and this confirms that technical factors are the key drivers for the digital currency for now.

As for the technicals, BTCUSD             , which dropped to June 1 lows in recent trading, needs to regain the $7,500 as soon as possible. Otherwise, a more aggressive retreat can be expected with the key goal at $6,000. Should the coin fail to attract buyers around the current levels, the $7,000 figure can be derailed, which will be a clear bearish signal for the pair.