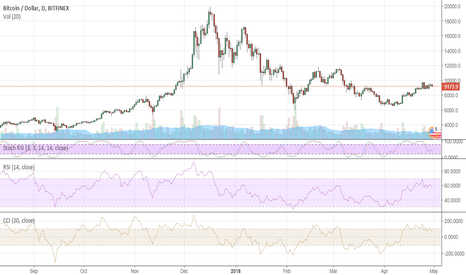 Last week, bitcoin             refreshed mid-March highs just below the $9,800 level. Since this jump, the price is holding above the 100-DMA which now comes around the psychological support at $9,000. As technical indicators show, the BTCUSD             pair set for further ascent in the short- and longer term.
Besides the technicals and the overall improving sentiment in the industry, the developments in Malta support the market significantly as the island looks set to become one of the world’s most prominent blockchain havens. In particular, the country, which attracts more and more crypto projects all over the world, has developed three legislative bills             in order to bringregulatory tactics to all future cryptocurrency exchanges. By the way, parliament has approved the bills             which will likely become laws soon.
From the technical point of view, bitcoin             needs to keep above the mentioned moving average in order to preserve the bullish bias. The key immediate target for the digital currency remains at $10,000, and as the price managed to keep above the $8,500 support during the latest profit-taking retreat, the chances for testing this important barrier are increasing.