A little more than a week ago, it was revealed that the CEO of Reddit, Steve ‘Cannibal’ Huffman edited user comments that were mean to him. While he might’ve thought his actions were cute and funny, the community, especially in the very popular and active The_Donald subreddit, went apeshit and the people turned on him, in the most acrimonious ways possible. 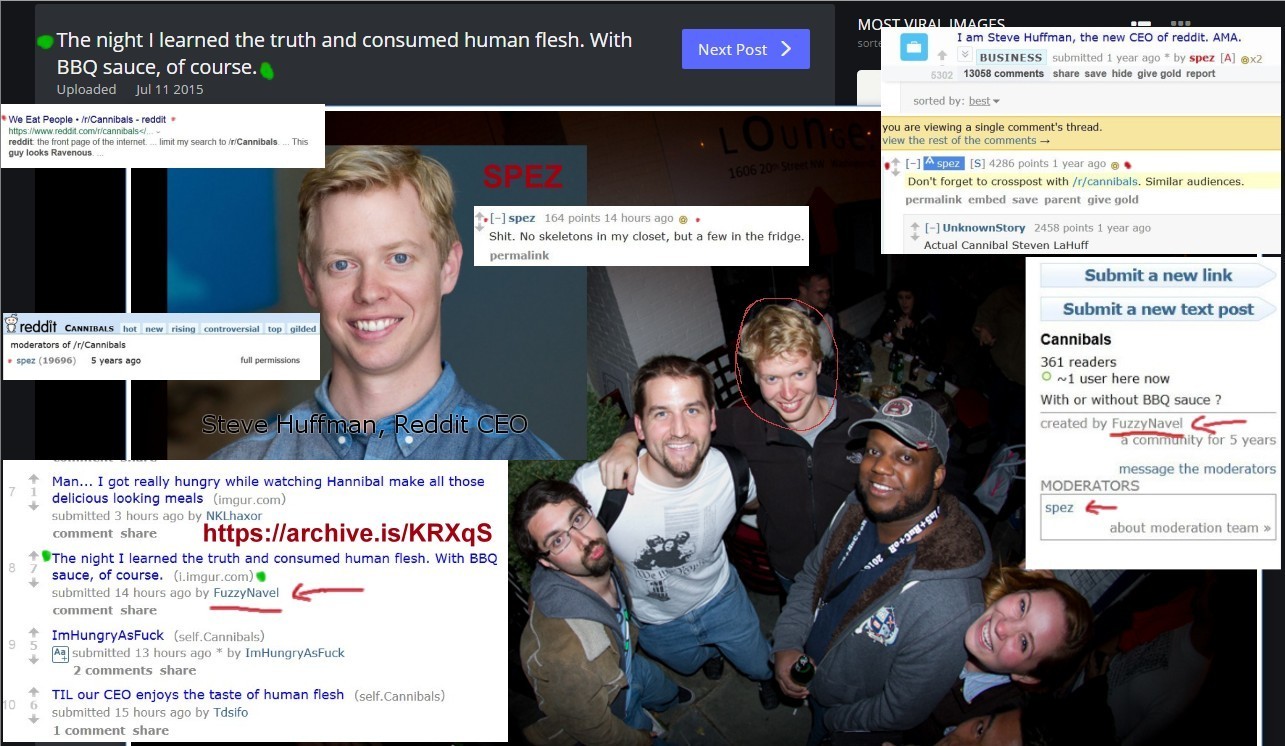 For those unfamiliar, The_Donald subreddit has grown into a community of truth seekers, delving into all sort of topics, ranging from John Podesta’s alleged child trafficking ring (Pizzagate) to Donald Trump’s cabinet appointments. In many ways, it has become ground zero for news and information — often scooping stories first before the legendary Matt Drudge. Head Cuck and Chief of Reddit, Steve Huffman, isn’t interested in any of that success and in a letter out today threatened an outright ban on The_Donald, in addition to announcing the corporate overlords at Reddit have identified many ‘troublesome users’ and will be taking action soon. Additionally, The_Donald will no longer enjoy the privilege of having their content featured on the r/all page — due to uncivil and troll like behavior.

tl;dr: I fucked up. I ruined Thanksgiving. I’m sorry. I won’t do it again. We are taking a more aggressive stance against toxic users and poorly behaving communities. You can filter r/all now.

I am sorry: I am sorry for compromising the trust you all have in Reddit, and I am sorry to those that I created work and stress for, particularly over the holidays. It is heartbreaking to think that my actions distracted people from their family over the holiday; instigated harassment of our moderators; and may have harmed Reddit itself, which I love more than just about anything.

The United States is more divided than ever, and we see that tension within Reddit itself. The community that was formed in support of President-elect Donald Trump organized and grew rapidly, but within it were users that devoted themselves to antagonising the broader Reddit community.

Many of you are aware of my attempt to troll the trolls last week. I honestly thought I might find some common ground with that community by meeting them on their level. It did not go as planned. I restored the original comments after less than an hour, and explained what I did.

I spent my formative years as a young troll on the Internet. I also led the team that built Reddit ten years ago, and spent years moderating the original Reddit communities, so I am as comfortable online as anyone. As CEO, I am often out in the world speaking about how Reddit is the home to conversation online, and a follow on question about harassment on our site is always asked. We have dedicated many of our resources to fighting harassment on Reddit, which is why letting one of our most engaged communities openly harass me felt hypocritical.

While many users across the site found what I did funny, or appreciated that I was standing up to the bullies (I received plenty of support from users of r/the_donald), many others did not. I understand what I did has greater implications than my relationship with one community, and it is fair to raise the question of whether this erodes trust in Reddit. I hope our transparency around this event is an indication that we take matters of trust seriously. Reddit is no longer the little website my college roommate, u/kn0thing, and I started more than eleven years ago. It is a massive collection of communities that provides news, entertainment, and fulfillment for millions of people around the world, and I am continually humbled by what Reddit has grown into. I will never risk your trust like this again, and we are updating our internal controls to prevent this sort of thing from happening in the future.

More than anything, I want Reddit to heal, and I want our country to heal, and although many of you have asked us to ban the r/the_donald outright, it is with this spirit of healing that I have resisted doing so. If there is anything about this election that we have learned, it is that there are communities that feel alienated and just want to be heard, and Reddit has always been a place where those voices can be heard.

However, when we separate the behavior of some of r/the_donald users from their politics, it is their behavior we cannot tolerate. The opening statement of our Content Policy asks that we all show enough respect to others so that we all may continue to enjoy Reddit for what it is. It is my first duty to do what is best for Reddit, and the current situation is not sustainable.

Historically, we have relied on our relationship with moderators to curb bad behaviors. While some of the moderators have been helpful, this has not been wholly effective, and we are now taking a more proactive approach to policing behavior that is detrimental to Reddit:
We have identified hundreds of the most toxic users and are taking action against them, ranging from warnings to timeouts to permanent bans. Posts stickied on r/the_donald will no longer appear in r/all. r/all is not our frontpage, but is a popular listing that our most engaged users frequent, including myself. The sticky feature was designed for moderators to make announcements or highlight specific posts. It was not meant to circumvent organic voting, which r/the_donald does to slingshot posts into r/all, often in a manner that is antagonistic to the rest of the community.

We will continue taking on the most troublesome users, and going forward, if we do not see the situation improve, we will continue to take privileges from communities whose users continually cross the line—up to an outright ban.

Again, I am sorry for the trouble I have caused. While I intended no harm, that was not the result, and I hope these changes improve your experience on Reddit. Steve

PS: As a bonus, I have enabled filtering for r/all for all users. You can modify the filters by visiting r/all on the desktop web (I’m old, sorry), but it will affect all platforms, including our native apps on iOS and Android.

The_Donald users aren’t happy at all by Huffman’s ‘coming together’ letter of healing.