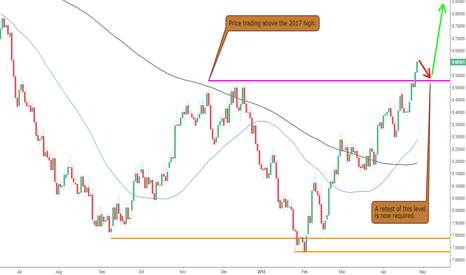 The USDSEK             was one of the top performing currencies in that period producing a most linear trend from circa 6.5000 as support to just short of 9.0000 as resistance, a move of 2500 pips that was covered in a year offering multiple compounding opportunities along its ascent.

This was a period of trend where we extracted over 55 000 pips in 9 months on only a handful of positions across all the above mentioned currencies. Since then, the FX market has been notoriously difficult to trade with sustained trends being non-existent.

The money since 2016 has been in the bull run in stocks and so those who have focused heavily on FX in this time will have found it difficult to make sustained profits. Trading side-ways markets has no edge.

Looking at the setup on the USDSEK             , we can see that price has now moved its way through the 200SMA and the 50SMA since February when the bulls took control of the market at the major support zone of 8.0000.

Price is now crucially also trading above the key pivot resistance of 2017 which is now acting as support. What we now want to see is a pullback to retest this level and then the next breakout to suggest a trend continuation towards 9.0000.

We will then look for the appropriate setup to start allocating risk to long trades.