A key measure of underlying U.S. inflation unexpectedly eased in February amid falling prices for autos and prescription drugs, giving the Federal Reserve more room to stick to its plan for being patient on raising interest rates.

Excluding food and energy, the so-called core consumer price index rose 0.1 percent from the prior month and 2.1 percent from a year earlier, according to a Labor Department report Tuesday. Those figures trailed the median estimates of economists. The broader CPI rose 0.2 percent from January, the first increase in four months, though the 1.5 percent annual gain missed projections and was the smallest rise since 2016.

U.S. stock futures and Treasuries rose while the dollar fell, as the data suggest there’s a greater chance that inflation won’t hold up around the Fed’s 2 percent objective — a development that would discourage policy makers from additional rate increases amid rising risks from weakening global growth.

The report is “certainly consistent with the view that we are going to be tracking at or below the Fed’s official goal,” said Scott Brown, chief economist at Raymond James Financial Inc. in St. Petersburg, Florida. “So there’s no real pressure for the Fed to move anytime soon.”

Pressures from tariffs and wages have produced “mixed results in terms of firms’ ability to raise the prices of the goods and services they produce,” Brown said.

Fed Chairman Jerome Powell made clear Friday that he and his colleagues are in no hurry to adjust interest rates as growth slows and inflation stays subdued. “With nothing in the outlook demanding an immediate policy response and particularly given muted inflation pressures, the committee has adopted a patient, wait-and-see approach,’’ he said in a speech in California.

Responding to questions, Powell said inflation in the U.S. is low, stable and doesn’t react much to slack in the economy. Policy makers will release updated quarterly projections for interest rates as well as inflation, growth and employment when they gather March 19-20.

The Fed has a 2 percent target for a separate inflation gauge from the Commerce Department that’s linked to consumer spending. That index tends to run slightly below the Labor Department’s CPI, and January figures are due March 29.

The CPI report showed prices of new vehicles fell for the first time in four months while used-car prices dropped 0.7 percent from January, the biggest drop since September.

Prescription-drug prices fell 1 percent on a monthly basis, the most on record, bringing the annual decline to 1.2 percent — the largest drop since 1972. Such figures give President Donald Trump another opportunity to claim credit for lower pharmaceutical prices, an issue that he’s recently tweeted about several times.

Shelter costs, which account for about a third of CPI and mainly include housing expenses, continued to hold up, with the fourth straight monthly increase of 0.3 percent. Owners-equivalent rent, one of the categories designed to track rental prices, rose 0.3 percent, as did rent of primary residence.

The slowdown in overall inflation is giving Americans more spending power. A separate Labor Department report on Wednesday showed that average hourly earnings, adjusted for inflation, rose 1.9 percent in February from a year earlier. That compares with 1.6 percent in the previous month and is the fastest pace since 2015. 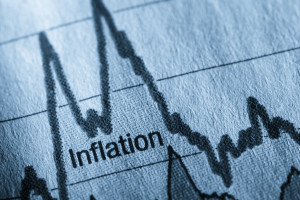