The Canadian dollar is drifting in the Wednesday session. Currently, USD/CAD is trading at 1.3321, down 0.03% on the day. On the release front, there are no Canadian events. In the U.S., the Federal Reserve winds up a 2-day meeting and will release a rate statement.

All eyes are will be on the Federal Reserve, which holds a policy meeting on Wednesday. The Fed is widely expected to maintain the benchmark rate at a range between 2.25 – 2.50 percent. Investors will be expecting the Fed to play a dovish tune in the March rate statement. The Fed’s balance sheet will also be under scrutiny, with the policymakers expected to announce when they will stop reducing the $4 billion balance sheet. The Fed has been reducing assets by $50 billion a month, but there has been criticism that this tightening is choking economic growth. The Fed will also publish its new dot plot, which is used to convey its interest rate outlook.

The Bank of Canada held the benchmark rate at 1.75% at its last meeting, but the bank’s stance has become more dovish in response to the economic downturn, which is deeper than policymakers estimated. The most recent rate statement noted that the economy could continue to require stimulus and said there was “increased uncertainty” regarding the timing of future rate hikes. If economic conditions remain soft, the BoC may have to consider a rate cut to stimulate growth. Weak oil prices and the global trade war have hurt the Canadian economy and dampened the critical export sector, and the Canadian dollar, which is down 1.2% in March, could face further headwinds.

Fed in focus as Brexit Strolls into Final Week

Dollar mixed ahead of Fed

USD/CAD was flat for much of the Asian session. The pair showed limited movement in the European session and has posted small losses in the North American trade 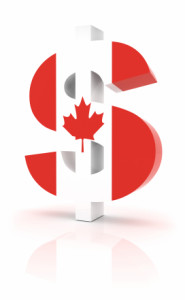