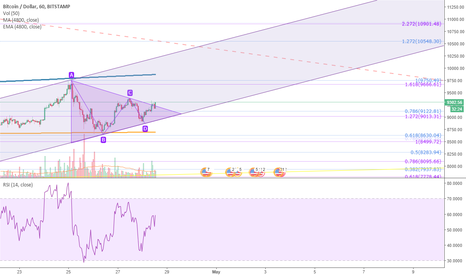 I’ll be closely watching the daily RSI if this move happens. Practically every time the daily RSI has exceeded 30 (oversold) to the downside its been after a massive sell off and it has then followed with a drive up through to the 70/80 (overbought) where we then have a decent crash. I think we’re heading this way now. Look back at the history.

So for this reason I’ll be watching both the RSI 80 level and the price target around 10900. Its possible we might have a drop back below 70/80 and then a push through higher to ~11.6k to test the previous double top before the price drops and the 2.618 extension. It depends on how long this move takes and if there’s a healthy dose of FOMO when people see the price moving again – media attention if we get over 10k might do just that. If its fast and rapid I think we’ll have an equally volatile drop down and won’t get much higher than the ~10900. Slow and steady might take us higher.

On the return journey I’d expect to test the 7800-8000 mark which would be around the .236 fib from the potential 10900 high. If the bears are back in full force from this big shake out we’ll see if it might take us further.

If we fail in the pennant and break out of the channel we will likely head down to test 200 EMA . We’ve tested this twice before so chances are we will break through it and head downwards.

PS As I write this looks like we’re trying to break out of the pennant .