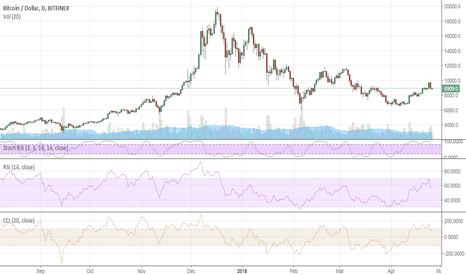 Bitcoin             price is sinking lower for a second day in a row as a result of a corrective retreat from mid-March highs. BTCUSD             attracted sellers as it was trying to challenge the $10,000 mark on Wednesday, and since then, the price has dropped to the $8,600 area.
The most obvious reason behind the fall is profit taking. It looks quite natural that some market participants decided to partially exit longs at six-week highs as the psychologically important $10,000 mark looks like a hard nut to crack from the first attempt. The depreciation could be exacerbated by the statement from the former CEO             of PaypalBill Harris             who called bitcoin             “the greatest scam in history”. However, in the bigger picture, this message is not a major driver for the market, which has already got used to similar criticism.
In April, the digital currency has appreciated an impressive 40%, and the bullish trend may well be resumed after a local correction, as the price is sinking to lower levels, which look more attractive for opening new long positions. The industry fundamentals look much healthier now, when the market has survived all the regulatory mess at its early stages.