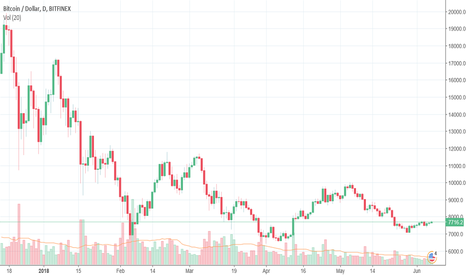 Bitcoin             drifted lower Wednesday, along with other cryptocurrencies. BTCUSD             however managed to keep above $7,400 and has resumed the recovery attempts today, with $7,800 remains the key hurdle for bulls in the short-term.

Some negative impact on digital currencies came from SEC chief statement saying that the agency won’t ease securities rule for cryptocurrencies. Meanwhile, the research firm Trefis has lowered its year-end price target for bitcoin             by about 17%, to $12,500 from the earlier estimate of $15,000, citing the lack of activity and inability to recover losses early in 2018.

Overall, the No.1 digital currency still lacks direction and continues its consolidation below $7,800 for the last two weeks. There are no any catalysts in the market that could change the picture in either direction. Technically, the coin struggles to overcome the major resistance but manages to keep close to it, which suggests the bulls don’t want to give up and are ready to take any opportunity to push the price higher. The question is whether such an opportunity emerges any time soon.