Wall Street has now truly jumped the shark – the one jockeyed by Jeff Bezos.

Last night Amazon reported a whopping 41% plunge in free cash flow for the March 2018 LTM period compared to prior year. Yet it was promptly rewarded by a $50 billion surge in market cap—-with $10 billion of that going to the guy riding topside on the Great White Shark of Bubble Finance.

That’s right. Amazon’s relatively meager operating free cash flow for the March 2017 LTM period had printed at $9.0 billion, but in the most recent 12 months the number has slithered all the way down to just $5.3 billion.

And that’s where the real insanity begins. A year ago Amazon’s market cap towered at $425 billion—meaning that it was being valued at a downright frisky 47X free cash flow. But fast forward a year and we get $780 billion in the market cap column this morning and 146X for the free cash flow multiple.

Folks, a company selling distilled water from the Fountain of Youth can’t be worth 146X free cash flow, but don’t tell the giddy lunatics on Wall Street because they are apparently just getting started.

Already at the crack of dawn SunTrust was out with a $1900 price target—meaning an implied market cap of $970 billion and 180X on the free cash flow multiple.

At this point, of course, you could say who’s counting and be done with it. But actually it’s worse—-and for both Amazon and the US economy.

That’s because Amazon is both the leading edge of the most fantastic ever bubble on Wall Street and also a poster boy for the manner in which Bubble Finance is hammering growth, jobs, incomes and economic vitality on main street.

Moreover, soon enough a collapsing Wall Street bubble will bring the already deeply impaired main street economy to its knees. So Amazon is a double-destroyer.

In this context, Bezos e-Commerce juggernaut racked up $174 billion of sales during the March LTM period, which represented a massive $45 billion or 35% gain over prior year (both figures exclude AWS). By way of comparison, that one-year gain is nearly double Macy’s total annual sales!

Even when you adjust for the Whole Foods acquisition that was not in the 2017 LTM numbers, the sales gain was about $35 billion or 27%.

Either way, the robo-traders got damn excited, scooping up AMZN’s shares hand-over-fist on the back of its “great sales momentum”. But as we said yesterday, headline reading algos don’t get far below the surface, and in this case they didn’t even break the skin.

Fully 96% of Amazon’s $5.0 billion of  LTM operating income was accounted for by its cloud services business (AWS).

The e-Commerce juggernaut, by contrast, posted just $188 million of  LTM operating income, which am0unts to, well, 0.1% of sales on a computational basis. But we’d round that to zero—especially because Amazon’s e-Commerce business was already almost there in the year ago period when its margin on sales came in a tad higher at 0.6%!

Needless to say,  AWS  has nothing to do with e-Commerce, and, instead, is in the brute force, capital-intensive server farm business. As the leader of a rapidly growing pack of cloud farmers,  AWS racked up a 44% year-on-year sales gain.

Even then, the world can only migrate from desk tops and discrete devices to the cloud once—so there is no conceivable way that current growth rates can be sustained or should be capitalized in perpetuity.

Still, give AWS the benefit of the doubt and value it at Microsoft’s red hot multiple of 50X, which we don’t think makes much sense, either. After all, it’s a 42-year old company that has posted essentially zero earnings growth over the last 7 years and much volatility of results.

In any event, at Microsoft’s elevated multiple of the moment, the cloud business is worth $200 billion. That reflects 50X the $4 billion of LTM net income attributable to AWS, which happens to be 100% of AMZN’s net income because e-Commerce earned zero after attributable interest and taxes.

Needless to say, that means the loony bins down on Wall Street are valuing Bezos’ profit-free e-Commerce monster at $580 billion. And that goes right to our double-destroyer point.

Amazon is undoubtedly one of the craziest momo stocks of all-time—meaning that there is $300 billion or even more of bottled air lodged in the implied $580 billion value of e-Commerce. That’s because the vast bulk of Amazon is in the GDP business—-that is, the moving and storage and delivery of good and services.

These grow at 3-4% per year in today’s geriatric US economy, and therefore merit perhaps a 15X multiple of steady-state operating free cash flow. And that would be generous in a world with normalized cap rates, which sooner or later must come.

Accordingly, to be worth even $280 billion, e-Commerce would have to generate nearly $19 billion of free cash flow, and that would be no lay-up. There are not that many malls left in the US to destroy and AMZN’s attempt to go international has been a huge thumb-sucker.

In other words, Amazon’s e-Commerce business is digging deeper and deeper into red ink abroad and growing steadily slower at home, where it does manage to eek out a marginal profit. So how does it ever generate the above postulated $19 billion of free cash flow?

Indeed, therein lies the skunk in the woodpile. Customers love Amazon precisely because it doesn’t generate any free cash flow at all and never could. The implicit business model is that Amazon returns to customers 100% of the prices they pay in the form of costs for logistics, storage, transportation, fulfillment and the underlying goods and services.

Moreover, minor tweaks like the announced increase of the Prime membership fee to $119 per year ( from $99) won’t make any difference because more than the resulting $2 billion gain ($20 X 100 million members) is being absorbed into the maws of Amazon video streaming and entertainment content services which are free to Prime members.

In short, there is $300 billion, $400 billion or even more bottled air in the e-Commerce business and the $200 billion we have ascribed to AWS isn’t all that rock solid, either. That’s because you simply can’t value “growth” stemming from a one-time shift to the cloud at a 50X multiple—-especially in the case of a capital intensive business like server farms.

Perhaps that’s why Amazon doesn’t break-out assets by segment: the return on capital at AWS, as opposed to sales, might look at lot less impressive.

Stated differently, Amazon’s $780 billion market cap is a giant momo hotel, and when that mega-bubble finally breaks the contagion and spillover effect will be monumental. Even our Microsoft benchmark will take a pasting.

After all, if not for the enormous forces of momentum in the casino, you couldn’t explain the chart below, either.

During the LTM period reported last night, Microsoft generated net income of $14.2 billion, and even if you reverse out the huge write-downs last year, the annualized run-rate is no higher than $20 billion. Yet its net income has been cycling around the $20 billion mark for the last 7 years.

At the same time, its market cap more than tripled from $200 billion to $740 billion—meaning that its valuation multiple also tripled.

We’d bet its the same reason that AMZN is capitalized at $780 billion: Namely, it reflects a casino that has run wild on central bank Bubble Finance, and that is itching for a giant fall now that central bankers are trying to climb off the ledge. 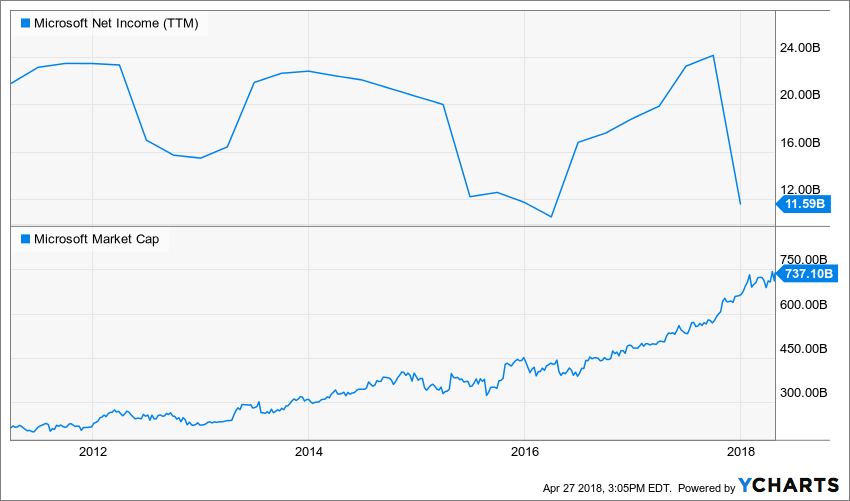 And that gets us to the second part of the doubly-whammy. Amazon is just the poster boy for value destruction on main street owing to the Fed’s Bubble Finance regime.

In this case, Jeff Bezos was paid another $10 billion last night for filling a report with the SEC which implicitly documented his massive predation on the main street economy and Amazon’s far reaching destruction of assets embodied in regional malls, shopping centers and mom and pop emporiums alike.

Yes, we understand all about Schumpeter’s “creative destruction” and that the genius of free market capitalism is that it continuously innovates and invents the new and discards the old, inefficient and obsolete. But the great Austrian also presumed that there was a level playing field—an honest free market, and most especially when it comes to pricing capital, debt and money.

Today there is no such thing—-that’s the ultimate evil of monetary central planning. It substitutes the fallible will of 12 mortals on the FOMC for the genius and continuously self-correcting verdicts of the free market.

And that lamentable result is not a bad thing just in the abstract. In fact, it’s a terrible thing in the concrete here and now because it utterly distorts the signaling system of the capital markets.

At the moment, those central bank engineered signals are telling Bezos and his army that their profit-free predator is worth nearly $600 billion, and that they should keep doing more of the same.

We will address this point at greater length in the near future, but suffice it to say that the C-suites all over the US economy are being given the same kind of false signals. And, most especially, signals to invest their cash flows and balance sheet capacity in Wall Street financial engineering schemes rather than main street growth, productive assets and human resources.

Unfortunately, the metrics which inform the daily economic narrative are rooted in the Keynesian models from which the GDP statistics are derived. That means current spending for consumption and capital goods get added to GDP but the current period costs of destroyed malls and their support infrastructure including employees don’t get deducted.

In the longer run, of course, the premature and non-free market based destruction of capital and other economic resources takes its toll. Ultimately, the result is lower productivity, reduced output, less GDP and lower living standards.

In the interim, however, Amazon’s predation is actually contributing to officially measured GDP because it’s building warehouses and distribution infrastructure like there is no tomorrow.

Yet that’s just another version of Bastiat’s broken window fallacy. The stones are being thrown by the Great White Shark of Bubble Finance, but the incentive to do so was mediated by Wall Street and fostered in the Eccles Building.

That is worth mentioning because  lurking beneath this morning’s slight beat on real GDP was a living example of this very broken window fallacy. When you strip-out the volatile short-term impact of inventories and exports, you get a reasonably serviceable measure of contemporaneous economic activity as measured by the Keynesian concept of “spending”.

Needless to say, a lot of windows were broken last summer during the great storms of 2017 and heavily repaired during Q4. So it is not surprising that the annualized rate of real final sales surged by 4.5%.

It’s also not surprising that the number reverted back to its tepid trend line in Q1, when real final sales expanded by only 1.6% at an annual rate.

As is also evident from this chart, even Keynesian style spending is running out of gas after 9-years of tepid business expansion, and in the Amazon story we have the reason why. Bubble Finance is breaking way too many windows.