Sterling is as volatile as you would expect one week from the initially scheduled Brexit day as traders continue to weigh up the risks of no-deal Brexit against what an extension does for May’s deal, or the prospect of other options still on the table including a second referendum. The offer of an extension provided some reprieve for the pound which had fallen back to recent range lows over the previous 48 hours, but whether it will continue to be supported will depend on just what Parliament does with that time. 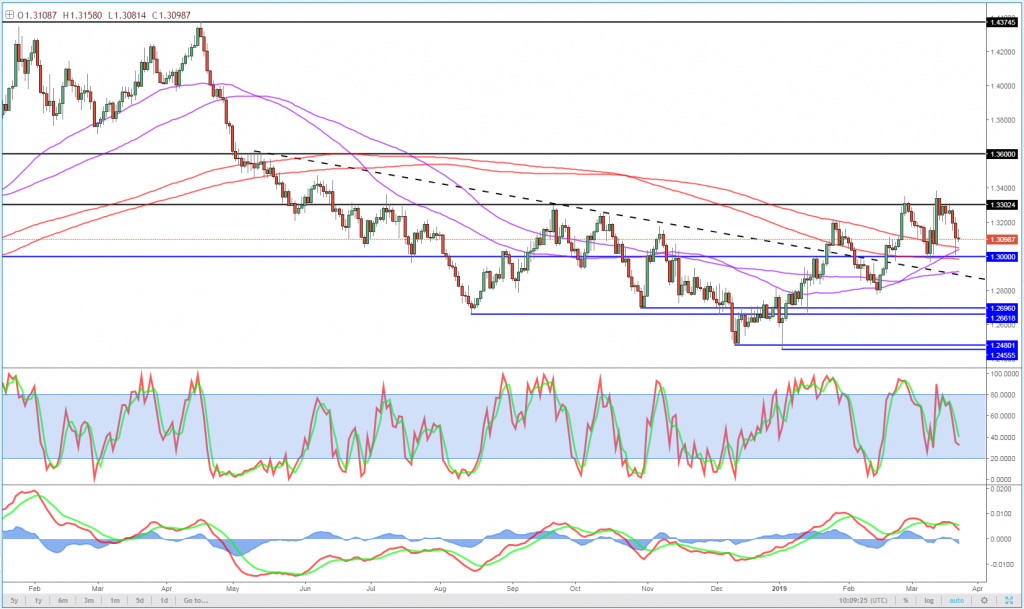 The Brexit timeline has repeatedly been updated but with European elections taking place in May, I struggle to see how another short-term extension can be agreed which means it’s either May’s deal, no-deal or a much longer extension. While I still think May’s deal will ultimately get over the line as MPs resist having to request a long extension, it will probably go right to the wire which means we now have three weeks of drama, rather than one, and many more twists and turns to come. Sterling is unlikely to stabilise any time soon.

The situation has just got far worse for Germany’s manufacturing sector which was already going through a rather unpleasant period. The PMI reading for March really does paint a very worrying picture for the sector and its ability to recover from the slump it’s in. Not only was this the worst reading in six and a half years, it was also accompanied by the first decrease in employment in three years as backlogs of work declined at their fastest rate in nearly a decade. 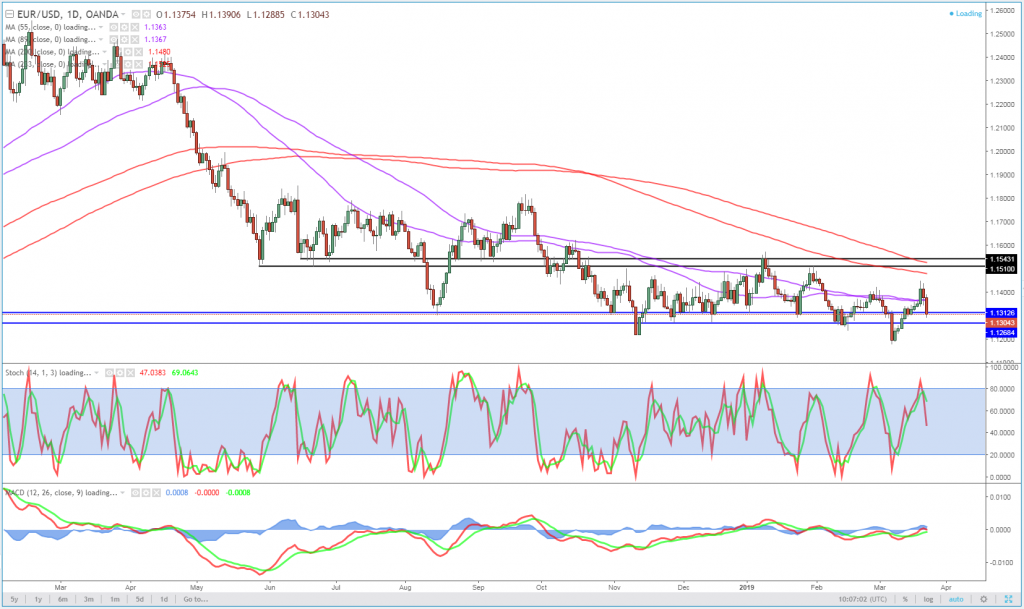 With numerous headwinds facing the sector in Germany – including a slowdown in the automotive sector, Brexit, US/China trade and a global economic slowdown – there’s little to be optimistic about. Thankfully, the services sector is offsetting some of the pain but that doesn’t make it any less worrying. That was quite clearly reflected in the euro in the aftermath of the release as it slipped below 1.13 against the dollar from near 1.14 previously.

The dollar is back on the decline this morning after enjoying quite a turnaround a day earlier, reversing Wednesday’s losses in full and more, which came as the Fed sent out a much more dovish message than markets were expecting. The bounce on Thursday certainly gave us food for thought and once again sends the message that there’s still plenty of support for the greenback around these trend lows. Still, it’s back in the red this morning and a move below this week’s lows could break a 10-month trend a see the greenback spiral lower. 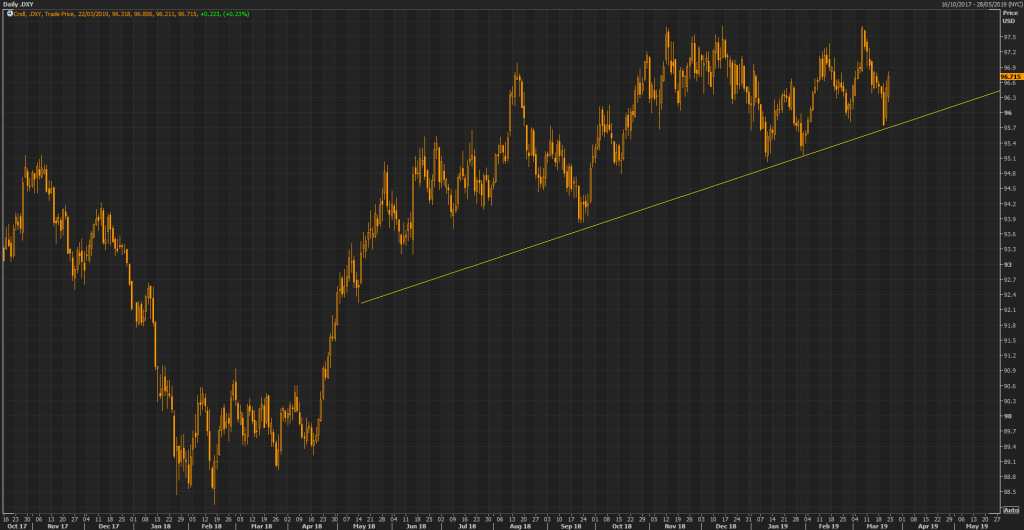 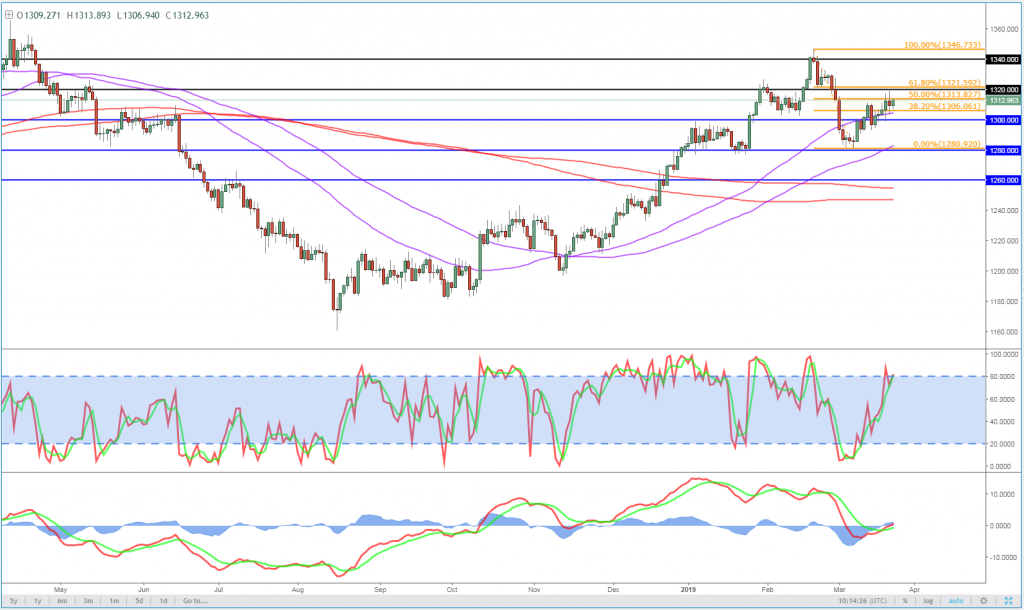 This would naturally be good news for gold bulls, with the yellow metal typically performing well when the dollar is weak. The softness that we’ve seen in the dollar over the last couple of weeks has lifted gold but perhaps not as much as you’d expect, which may be a bearish signal. That said, if the dollar breaks its trend then I would expect that to rapidly change. For now, the gold rally continues to look like more of a corrective move than a continuation of the longer rally it’s enjoying. A break above $1,320 may well change that. 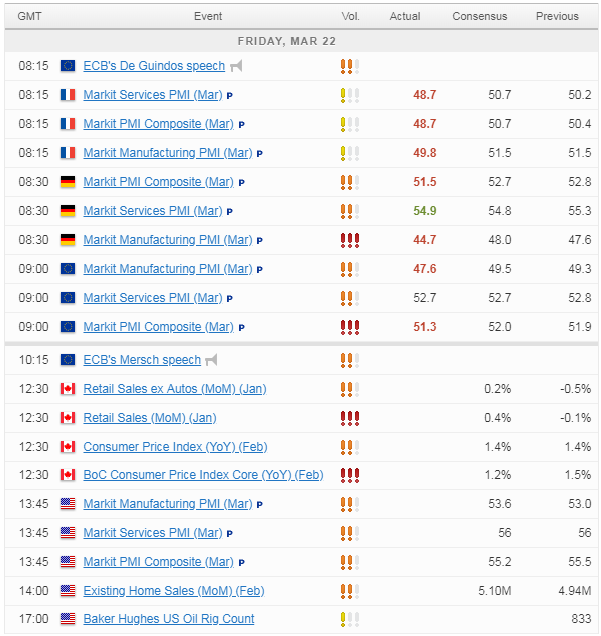 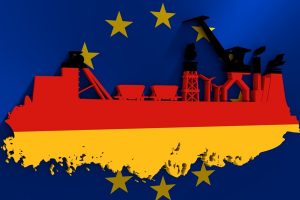