MarketWatch
Gold prices gained on Tuesday, looking to recoup most of the previous session’s losses, with the dollar weakening in the wake of monthly U.S. inflation data, as investors await a vote by U.K. lawmakers on Prime Minister Theresa May’s Brexit plan.

Prime Minister May won last-minute concessions from the European Union over the Brexit divorce deal late Monday in a bid to win support for her plan in a parliamentary vote later Tuesday. May is still seen facing an uphill battle to win approval for the deal.

See: Here’s what’s next for Brexit and the British pound

The dollar fell more steeply shortly after data revealed that the U.S. consumer-price index climbed 0.2% in February, matching market expectations, while the cost of living over the past year slowed again to 1.5% from 1.6%.

A core reading of inflation, stripping out volatile food and energy prices, edged 0.1% higher, representing the smallest rise since August. The yearly increase in the so-called core rate also slowed a tick to 2.1%. Gold tends to be viewed as a hedge against inflation, with readings of muted inflation providing little ammunition for gold bugs.

But given the data, “the Fed would appear to be justified in supporting the real economy by being patient and leaving interest rates on hold for a potentially extended period,” Paul Ashworth, chief U.S. economist at Capital Economics, wrote in note.

That softer tone to the dollar helped buoy gold, analysts said. A cheaper buck can be a positive for commodities priced in the greenback by making them less expensive to users of other currencies.

The aftermath of the Brexit vote could set the tone for gold. A victory for May could boost overall appetite for risky assets, which would likely put renewed pressure on gold, said Eugen Weinberg, head of commodity research at Commerzbank, in a note. 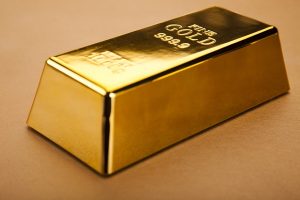