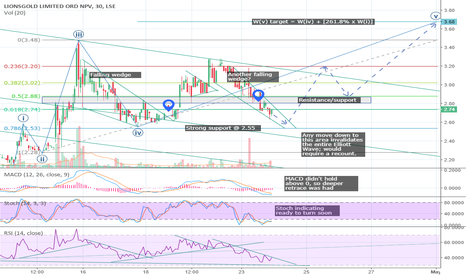 So the previously noted resistance area did not hold, following the release of an “expected news” type RNS. This means we’re looking now at the support area that was previously found by the 4th (corrective) subwave. Supporting the cause for positive price action above this point shortly is another small ( bullish ) falling wedge pattern.

However if the level of 2.55 does not hold then this whole Elliott wave becomes invalidated.

The top 5th wave target has been tweaked slightly to reflect the relationship that W1 and W5 often have in Elliott theory. So I’m no longer using an extension of the third subwave for this.

(N.B. I’m referring to these as “subwaves” because we’re on a really small scale here. I believe that the subwaves i – v will end up being Wave 1 of the larger pattern, which will become obvious on the daily chart .)