Slightly bruised but certainly not battered, Wall Street limped into the close on Friday following massive Non-Farm Payrolls (NFP) misses. Although a print of 20,000 jobs instead of the expected 180,000 was not what investors wanted to see, all other data pointed to a reasonably rosy picture in the US. Unemployment fell to near-record lows, housing starts rebounded to 1.2 million and wage data showed an increase of 3.4%. Hardly the sort of data to upset the economic applecart given the NFP is a volatile data set at the best of times.

This likely explains why US stocks recorded only modest declines with the S&P falling 0.21%, the Dow Jones 0.09% and the Nasdaq 0.18% to close the week. Asia fared far worse with China’s export data collapsing by 20%. The China Stock Index (CSI) 300 tanked by 4.4%, while the Hang Seng and Nikkei were close behind, both dropping 2%. Worries over China are likely to be a recurring theme today in Asia as we await details (still) on the US-China trade talks.

The US dollar continues to defy the harbingers of doom (except the author), falling only modestly on Friday, ending a seven-day climb in the dollar index. The greenback continued to benefit from haven status as the rally in the benchmark 10-year bonds continued unabated, finishing the week up 13 basis points. Bond inflows are supportive of the dollar, as is the fact that of all major central banks in the world, the Federal Reserve is best positioned to turn on the monetary taps should a recession arrive.

The data schedule is packed this week with a nice geographical spread, starting with German Industrial Production this afternoon followed by US retail sales this evening. Tuesday sees Australian homes loans and US inflation numbers release but the main event will be the UK Brexit Vote, which rests on a hopefully-palatable motion being put forward to the House of Commons. This could drag on with successive votes following on Wednesday and Thursday. Thursday sees China release highly-anticipated retail sales and industrial production numbers.

The week’s trading is likely to be highly headline driven, with short-term volatility around political and data news. The almost forgotten US-China trade talks have been subsumed in a cacophony of data noise but remain the only game in town and will set the macro-economic tone for the rest of H1 2019. Until then, traders and investors will have itchy-trigger fingers across most asset classes.

The US dollar should remain strong as haven inflows into the bond market continue. Friday’s fall is likely corrective after dollar indices extended their run higher. China jitters will likely see regional currencies on the back foot today, particularly in North Asia. The Japanese yen (JPY) could buck the trend as it saw safe-haven flows of its own on Friday.

The Australian (AUD) and New Zealand (NZD) dollars may remain under pressure as proxies for China risk aversion. A weak Australian home-loans print tomorrow could accelerate this trend given the wobbles in the lucky country’s not-so-lucky property market at the moment.

Sterling (GBP) may be put into the too-hard box trading wise as we face three potential Brexit votes on successive days from tomorrow. The GBP has given all its recent gains back to remain anchored under 1.3000 this morning, and being long above 1.3200 remains a potentially risky proposition. The pound is down 0.4% today as the Financial Times reports Prime Minister May might be forced to resign. The street is keen to buy Her Majesty’s pound on any sign of a Brexit deal breakthrough or Article 50 extension, but with the 29 March fast-approaching, there is no guarantee that Brexit day will be B-day or bidet.

Asian markets will likely stay in the red today unless there is a definite trade deal announcement. Around the region, the tone has disengaged from Wall Street to some extent, taking on a much more specifically China outlook. European stocks may not be out of the firing line either if Germany’s industrial production data tonight is poor.

Both Brent crude and WTI have eked out small gains in early trading following Fridays approximately 1% falls. The rise is most likely due to gentle profit-taking rather than a return of confidence. OPEC+’s intention to extend their cuts beyond April continues to be balanced by increasing US production. But the China data has spooked oil markets and will likely overhang them like a dark cloud this week.

Gold rallied to USD1,299.00 an ounce on Friday benefitting from safe-haven flows and a weaker dollar. With so much uncertainty this week, that theme could continue with buyers of the yellow metal lining up on dips. 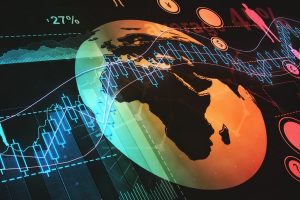