Will Weakness Take The CHFJPY Through Support? 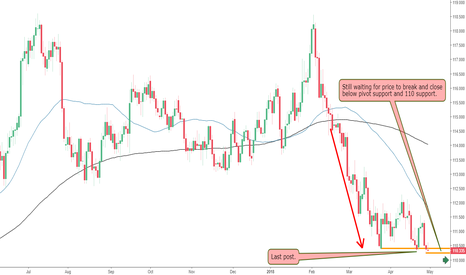 We last posted on the CHFJPY on April 21st when several days of weakness had given momentum to the bears which were looking to take price through the pivot support of March.

The breakout did not materialise and, as has been a feature of FX, price instead found support and the bulls kept price within consolidation. The pullback to the upside lasted only 3 days after which the bears came in strong. Price is now again attempting to push through the drawn-in pivot support zone .

Once this level has been confirmed as resistance will we look to start allocating risk to further short positions with a view to seeing price move towards 100 and beyond.

As trend trades, using round numbers as “target level” removes the need for fixed targets and, instead, allows us to let our winning trades run. This is inline with the very essence of good trading which is to cut losers short and let winners run.

Patience needed for now on the CHFJPY             until price clears these key support levels.